The journey during these couple of weeks is very unexpected and exciting. It started off with a simple idea. The idea is to use our free time to teach juniors about basics of gnu/linux. I got free time for the whole week, so I randomly posted in Tech{know}logy club group telling that we will celebrate install week in digital library. Right after I posted in the group, I answered few FAQ’s :-

1) Is it compulsory that people should install something ?

A) Not really. You can just come over to library with your work and enjoy the party.

A) We are all bunch of people getting started with linux. It’s like a kick start week for people to dive in to linux and programming.

On the first and second day of the event, we got around 15 people attending the event but on next few days, count of people increased to over 30 people. We just rolled around with basics of gnu/linux for first 3 days. People started learning things on their own. Sarup spoke about git on 5th day. On final day, people created their own jekyll blogs in local with the help of git and started hacking. Ravinder,Nishaanth,Sambhav and Sachin helped people when they got stuck with some problems. At the end of session, we decided to screen Aaron Swartz’s documentary. Sarup suggested that we can conduct a 3 day fedora event which involves documentary screening on day1. We immediately agreed his views. Sarup documented about event schedule in fedora wiki. You can find more about it here 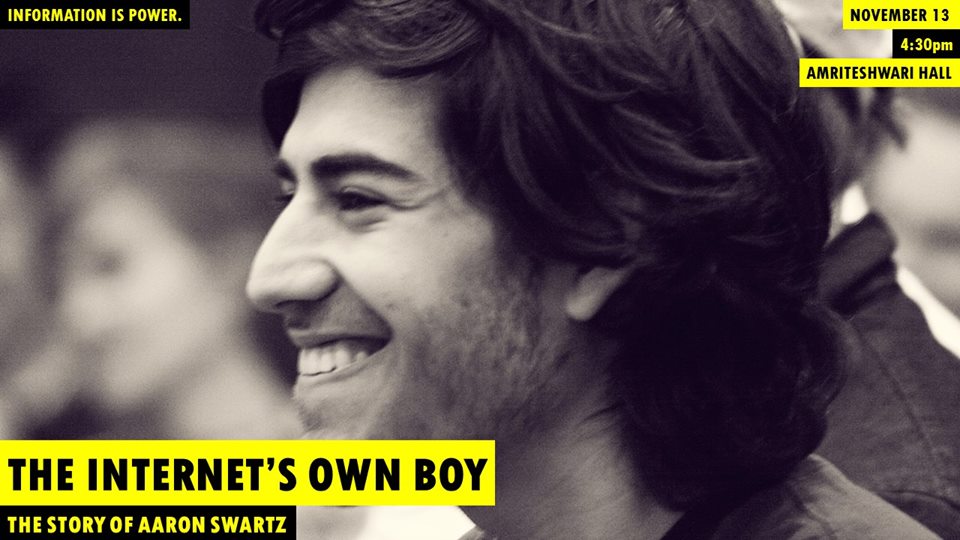 I got permissions to take the auditorium for screening “The Internet’s Own Boy” documentary. I was really excited about the fact that I am getting one of the things in my wish list fullfilled. Anirudh Menon helped us with posters. I created a facebook event to get more people for documentary. You can find it here. We stuggled a bit to get glossy posters. Sachin Kamath and I announced about the event in 1st, 2nd and 3rd year classrooms. Around 200 people came to watch the documentary.

One of the things that really made me happy is a Facebook post that was put online after documentary screening. 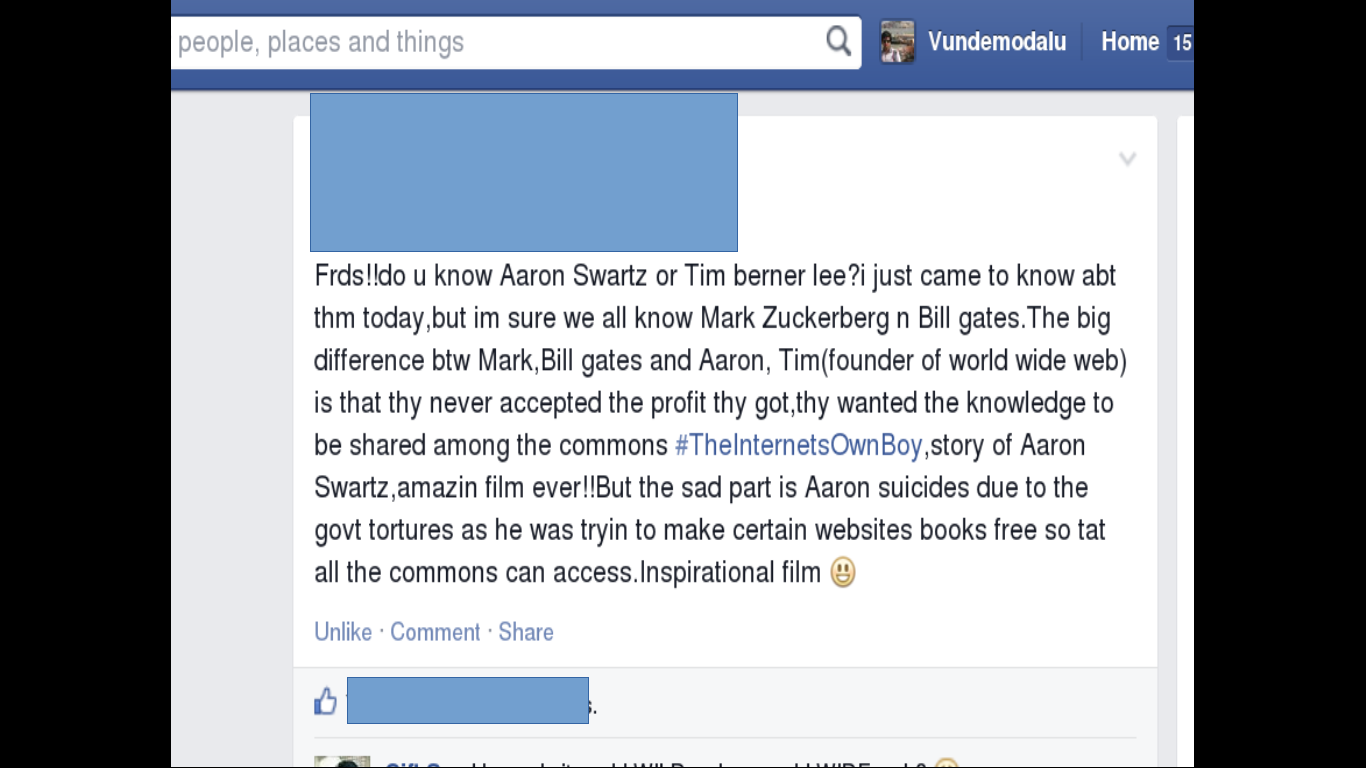 Next day, we did series of talks. 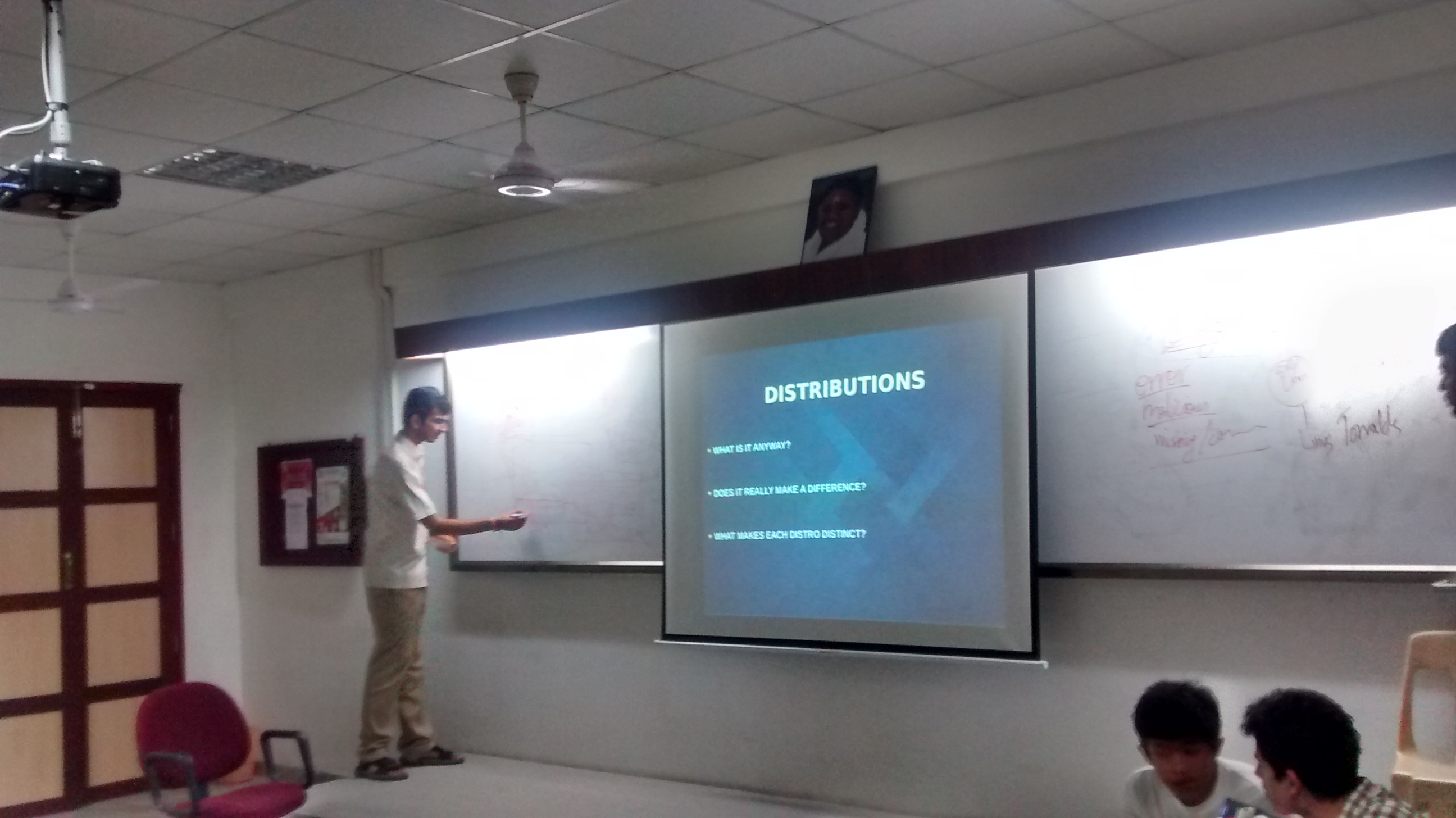 Abhishek Ahuja gave an Intro to FOSS, and alternatives to popular software. Abhishek is an awesome speaker. His depth into conceptual thinking is really great. 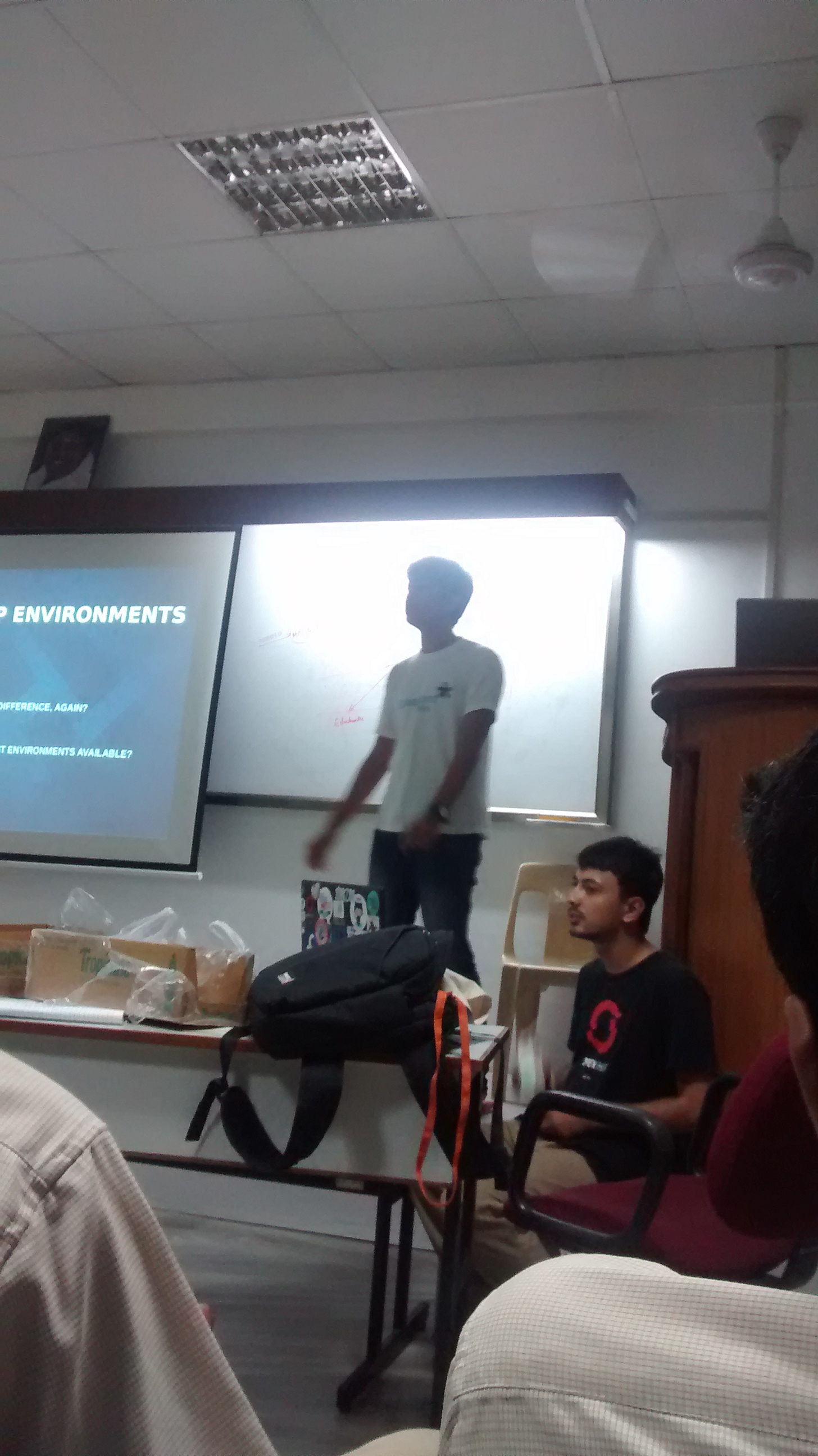 Sachin Kamath, who contributed a lot of his time during install fest gave a talk on advantages of Linux, introduction to various distros and desktop environments. His talk stated with normal energy levels, but by the end, it became electric and awesome. He is able to convince audience to use gnu/linux operating systems. 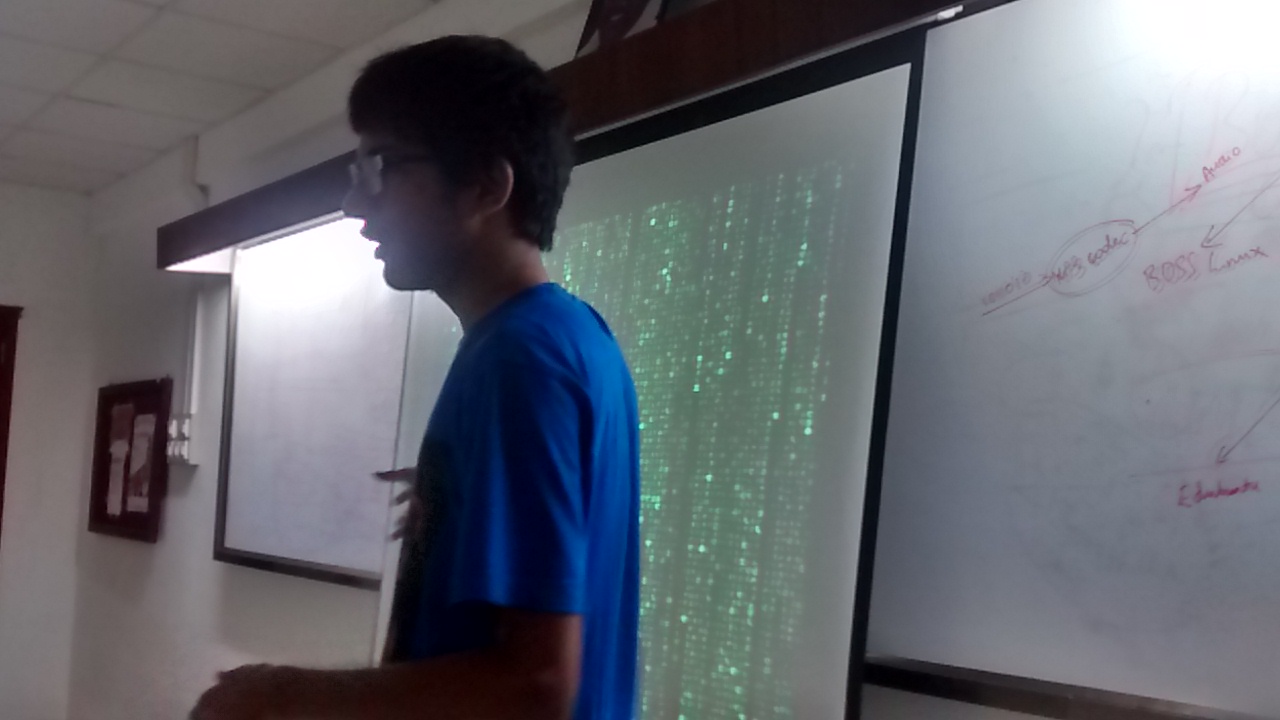 I talked about my experiments with operating systems. I tried walking people through the philosophy followed by various operating systems and effects by sharing my own personal experiences. 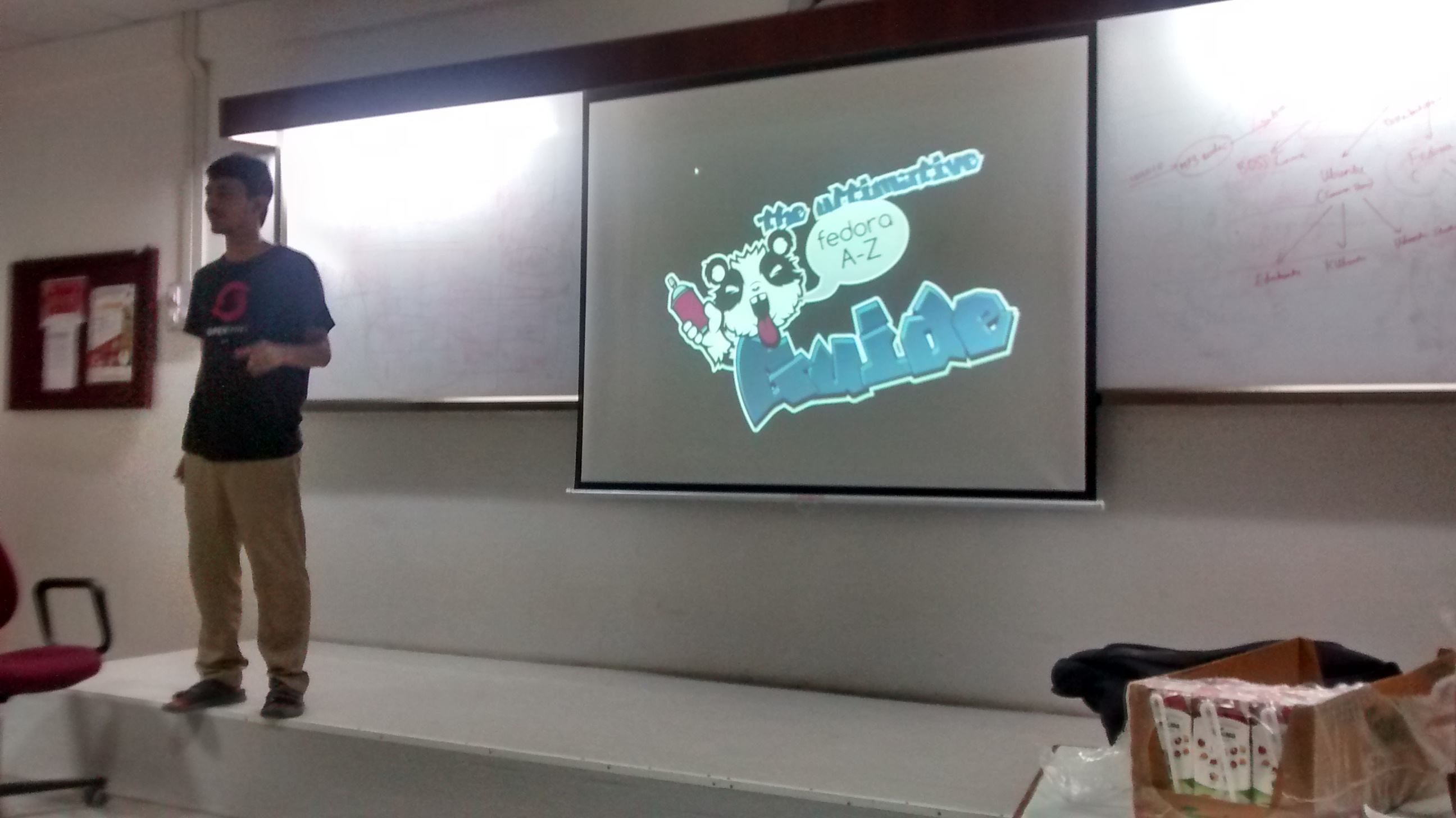 Sarup took Intro to the Fedora Project and what it means for students, followed by a run through the A-Z guide. He gave a detailed explaination about how the fedora community works. I saw great deal of excitement in sarup’s face when the slide with letter G gave Glitter Gallery. We all knew that sarup contributes to fedora but we did not expect him to know how the whole fedora community functions. He introduced us to a lot of interesting people in fedora community. Sarup continued his talk on monday with some very inspiring notes. 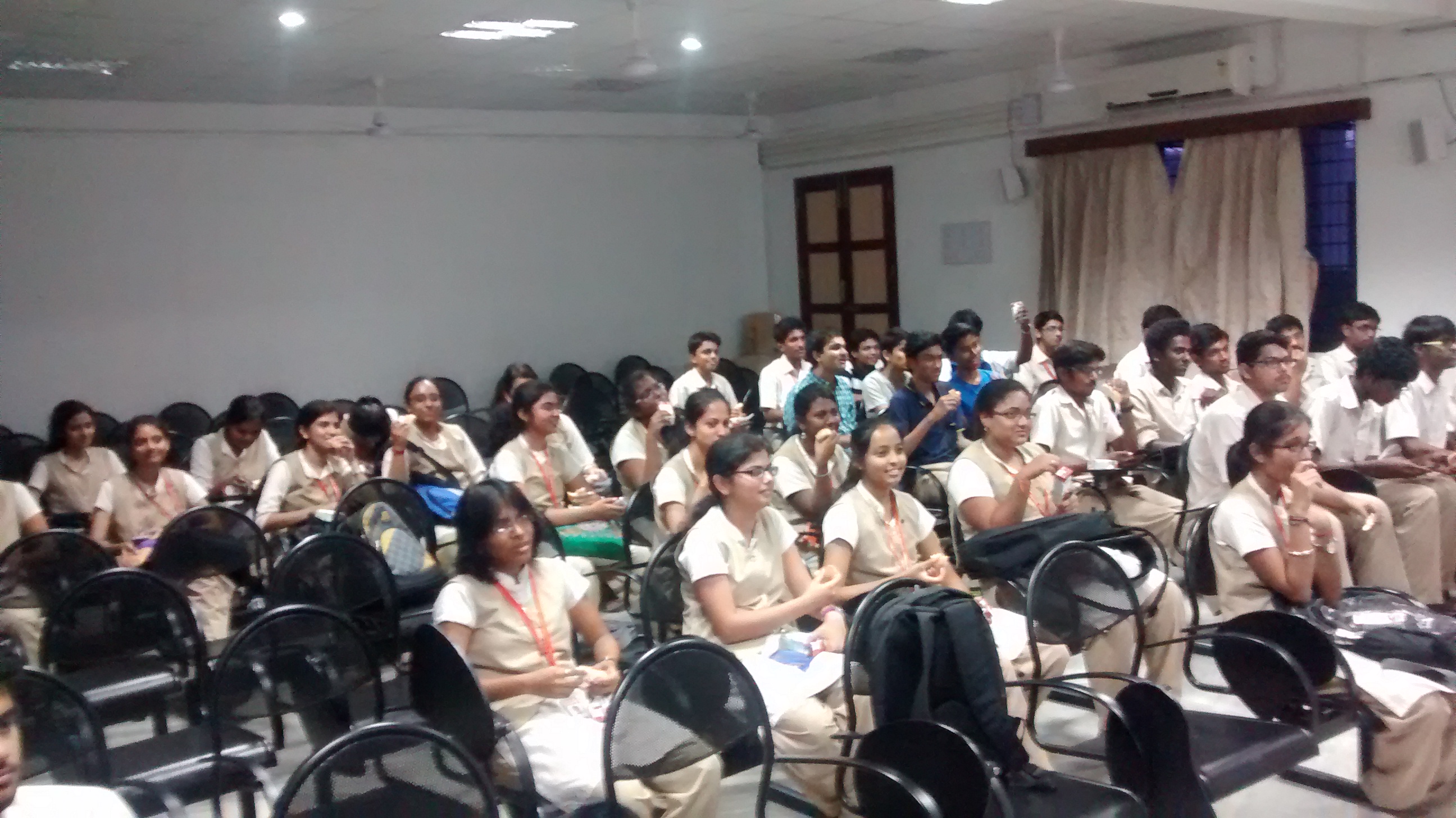 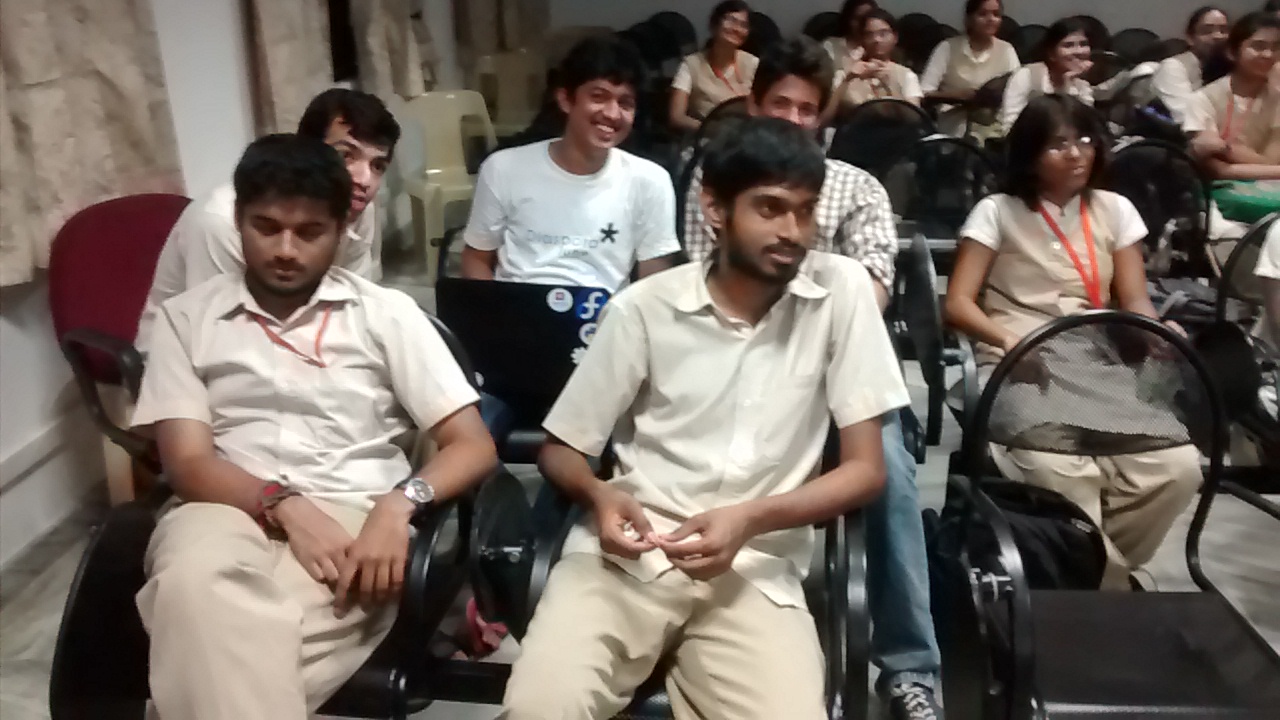 Around 35 participants came for the talks on friday and monday. We bought some food for participants and had awesome time discussing tech with techies. Overall, I felt really happy about the event. We did not expect so many good things to happen in very short span of time. I hope more such events will happen.

Fedora engagement day by Vundemodalu Manjush is licensed under a Creative Commons Attribution-NonCommercial 4.0 International License.
Based on a work at https://github.com/manjush3v/manjush3v.github.io.